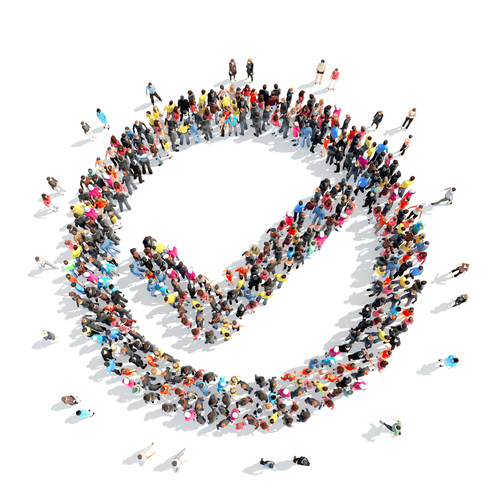 It’s 1907 and Charles Darwin’s cousin, Francis Galton ­- an anthropologist and statistician – ­is at a farmer’s fair in Plymouth, England. There’s a competition to guess the weight of an ox and being a curious guy Galton takes all the contestant’s tickets and runs them through a statistical analysis. Was it possible that taken as a whole, everyone’s guesses could be more accurate than those of the fair’s cattle experts? He found that yes, once he averaged the 800 guesses their collective answer was far more accurate than any individual’s conclusion. Galton’s experiment has become hugely famous as the basis behind the “wisdom of the crowds” theory: the idea that if people pool together their thoughts, collective intelligence will emerge.

But, Can You Trust The Group?

It’s a nice idea that if we all come together our bad ideas will cancel out and only the most brilliant thoughts will rise to the top. Unfortunately, we know that peer influence can definitely lead people astray — studies show that even on sites like Yelp, which are designed to bring knowledge to the group, ratings are skewed by companies and the influence of other commenters. If you’ve read that a restaurant was wonderful, you’re more likely to say the same — even if you privately think the food is terrible. When it comes to processing information online we are all influenced by both clever marketing techniques and trolls­­ — when P​opular Science made the decision to take away the option to comment on stories their online­-content director stated, “Even a factitious minority wields enough power to skew a reader’s perception of a story.” While online forums offer a chance to engage with a topic more deeply, if a loud minority is hijacking a conversation or a moderator is limiting the diversity of opinion, readers are going to walk away with zero benefits.

How We Can Maximize The Positive Power of a Crowd

Galton’s experiment was not wrong –­­ the knowledge of a crowd can be wiser than that of an individual. But we need to be careful with how this knowledge is collected. Studies show that social influences bias systems that are designed to pool collective intelligence. If a crowd’s opinion is going to be averaged into constructive intelligence, then each member of the group needs to come to the table with their own observations. “The case where the wisdom­of­the­crowd effects work well is where each person brings their own observation and knowledge, however imperfect and idiosyncratic,” said associate psychology professor Christopher Chabris to T​he Boston Globe. “​What this shows is when you don’t have that independence and everyone sees the history of other people’s opinions, you can get big biases in the outcome.”

What is also necessary is a mechanism that can collect and then average these diverse opinions. In a 2010 paper, academics from the Amsterdam School for Cultural Analysis argued that Wikipedia’s success as a tool of information mostly stems from the fact that it is able to process human resources through a socio-­technical system. Reading through comment after comment isn’t going to bring wisdom to the crowd — there needs to be a way for each distinct voice to be pooled into a consensus. The chance to learn from the intelligence of our peers shouldn’t be lost on us, we just need the right way to equalize the conversation.

This can be achieved by a new type of online community — one that optimizes the wisdom of the crowd without bias and one that provides an opportunity for interests groups, businesses, and government enterprises alike to advance their goals. A community where productivity and collaboration are valued, and users are able to readily stay informed and find solutions. The future of online collectives is still very much evolving — and we can’t wait to be a part of it.